Hey there my readers!  Not in the chattiest of moods tonight so just going to say, hope you like this post as much as I enjoyed putting it together for you! Have a great weekend!

Hello lovelies!  Today’s post was inspired by the new Frozen Elegance Deco(c)rate box, And all I can say is wow.  This is by far my favorite box thus far and that is saying a lot considering how great the first two were. I’m showing you just a few of my favorite items from the box along with the super elegant dress from Cynful that can also look more sporty if worn in the racing stripe version.  Can we also pause a moment to admire the new hair base from Tableau Vivant for the Simone Bento head, along with shadow from Veechi and moles from Chocolate Atelier; They are all so gorgeous. 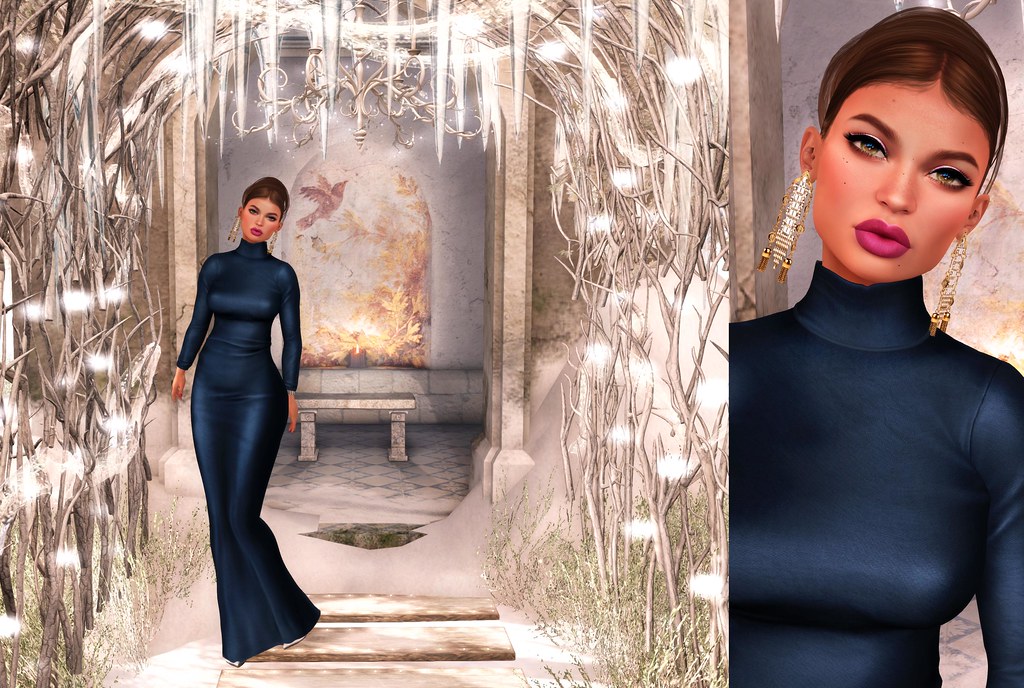 So I’m not exactly sure what got into me, but I decided to do a large fashion post featuring four new hair styles from Hair Fair while also doing them with four completely different looks!  I know, I know, hope you were sitting down when you saw that news lol.  It was fun to show off some of my latest fave tops, hair and jewelry but if someone tells you doing pics in a studio isn’t time consuming they are full of it!

I also want to make a special note that Hair Fair 2016 continues for one more week and runs until July 31st.  If you have not been yet, please make the time to go.  I know there are lots of events out there, but this event is also a fundraiser for Wigs For Kids, so not only do you get amazing new styles you also know you are putting some good mojo out there! For any more information on the event please head over to the Hair Fair Main Website.

The fabulous and talented Strawberry Singh has started different weekly memes on her blog for those of us who would want to take part.  Since this year one of my goals as a blogger was to take part in more challenges and memes I figured I would give these a shot.  I am behind, so I decided to do the first two, My Seven SL Facts and The Procrastination Meme. I hope this helps everyone get to know me a little more.

Besides blogging and of-course shopping, I love the live music that SL has to offer and try to get out and hear a show atleast once a week.  I spent several years of my SL doing nothing but going from one show to another night after night, it was almost like having a special hangout in SL to go to, but in my opinion way better.

In my early days of SL I was a table/cage dancer at a club where I wore lingerie. It was a lot of fun, but didn’t last long because the owners kept moving locations and then got involved with the wrong crowd.

I’ve been collared once in SL. It lasted only a few months and although I wore a locked collar everyday none of my friends had a clue that I was someone’s sub.  Something about me having a crazy strong personality or something.

I’ve rented or owned land since around Oct/Nov 2006. I absolutely love having my own space since I tend to be a home body even in SL. My first rental was an old world rustic stone cottage, I only lived in the upper part since I barely had any prim allowance.

I enjoy SL nude beaches and have been going since early 2007, although now I don’t go all that often anymore and usually only to one beach that is members only.

Since I had so little time to be social I took up blogging after having my baby girl and wanting something to do in my SL besides stand around looking pretty at home.    My friend Kimbra had been blogging for several months and told me to give it a try.

I rarely spend time with my friends in world, most of the time I just chat with them in IM, unless we are going to be heading to the same location for a specific reason.

What is the rez date for your current SL Avatar that you use most often? Cami Mahovlich – My first avatar and my main since June 27, 2006

Where was the first place you made friends as a newb and got to know people in Second Life? The Shelter, which was my hangout for a couple years till the evil immature overlords took over.

Where do you spend most of your SL time now? At my home enjoying my actual land or up on my studio platform working on my blog.

Who is your closest friend in Second Life? (only pick one) Kimbra Iridescent since February 2008 when she IMed me at a club to say she was a fan of The Killers too.

What is the most favorite thing in your inventory? (only pick one) My mesh barefeet from Gos Boutique.

The last thing you purchased in Second Life? Ginger Satin Dress in Blue from 1 Hundred at Event Hollywood

What color clothing does your avatar wear most often? Black or red

Do you prefer to walk, run or fly? Fly because I’m too impatient to walk and I think I look stupid when I run.

What is the craziest thing you’ve ever done in SL? I don’t think I’ve really done anything crazy in SL that I can think of.

Who would you like to play YOU, in the movie of your SLife? Ummm no idea, Mila Kunis maybe?

I intended to get this post out yesterday but got so caught up in all the awesome Valentine gifts and goodies around the grid I sorta got distracted.  Then when you factor in I had a spark of decorating creativity in my home I decided that it was OK to get the post out today instead.  Mon Cheri just did a big February release inspired by Valentine’s in the form of jersey dresses, mini skirts, cropped shirts, tights and jeggings.  Have no fear though, not everything is in pink and red with hearts and even things with hearts can be worn anytime you are in the mood to feel cute.  Several of my accessories came from the PurpleMoon Creations Cherries Hunt that was going on for the second time this year.  It’s such a fabulous little hunt that is always filled with lots of awesome red items which a red lover like myself adores.  Lastly two of my fave new hairs are both from Truth, one for this round of C88 and the other available at his mainstore.  Tenille with the hair bow is just the sweetest ever and one I see myself wearing often.  Today I will leave you with one of my fave Cure songs Friday I’m In Love, enjoy and happy shopping!

I’m back from my trip and decided to start off with the final week of the Raiding My Closet challenge. Since I left town last Tuesday I ran out of time to get it done so here it is a week late but hey atleast I can say I finished it. Another fantastic look put together with many things in my inventory I’ve never had the chance to wear. This pic was also taken on my hubby’s PC since mine decided it didn’t feel like working anymore upon my return. Needless to say it’s so fabulous I think I’m gonna stay using it since I can run shadows and have no lag at all! Hope you had a great week and happy Monday!

Shape: Mine ( Not for Sale)

Hello Lovelies!  Just a quick autumn look of the day as I start my Saturday morning enjoying a cup of coffee as I watch the sunrise over my little cabin. From NiNi Creations we have this super cute mesh sweater dress that comes in a variety of colors in a fantastic knit pattern.  This dress is so me and perfect for a lazy day relaxing or shopping, so it was easy to pair with two more of my Cinema fave Exclusives, the sweet hair from Wasabi Pills and mesh suede boots from Lassitude & Ennui.  For all those coffee lovers out there Atelier Kreslo has these awesome to-go cups at thier store, along with to-go mugs.  Each pack comes with a cup that includes a holding/drinking animation and a cup to rez.  Hope you all have a fabulous weekend.

Shape: Mine (not for sale) 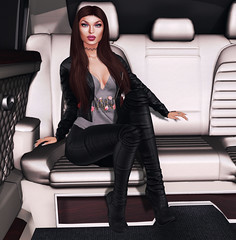